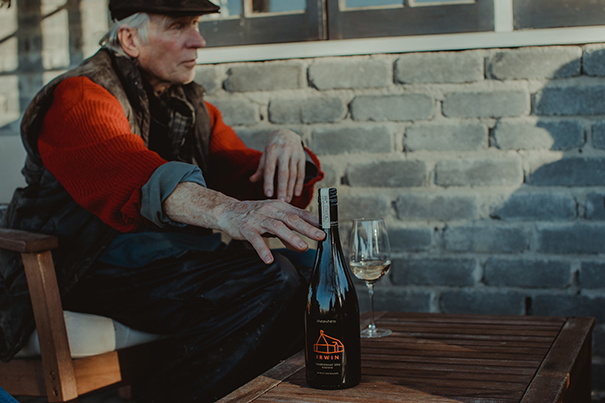 THE father of modern viticulture and his visionary son have been honoured by Matawhero Wines this month with the release of a flagship Chardonnay that bears the family name.

The limited edition Irwin is a barrel fermented chardonnay from Gisborne. The wine is produced from Mendoza chardonnay vines and immortalizes the late Bill Irwin who imported Mendoza clones to New Zealand in the late 1960s and planted them at Riverpoint Road, Gisborne.

“He would be immensely proud,” says Bill’s son Denis Irwin, who became emotional when he learned the new label would carry the family name.

“It’s the ultimate accolade and my father would be excessively proud. In my time I got a huge amount of airplay, but it was Bill’s quiet determined drive that radically kick-started the New Zealand wine industry.”

“Sometimes I reflect on what Dad did for New Zealand grape growers and I am incredulous. He was ordering cuttings from overseas when no one else was, and generously distributing them throughout the country. It was the ultimate gift to the industry.”

“He was also corresponding with viticultural leaders in Europe, Australia and the United States and was responsible for the importation of virus-free root stock.” Denis says it gave vineyards of the 1970s, and as a result the country’s wine industry, a strong base from which to flourish.

Later, with equal measures of hard work and audacity, Denis continued to display Irwin innovation when he created Matawhero Wines in 1975.

Seventy-year-old Denis recalls “when we opened Matawhero Wines there were probably 20 wineries around the country. Now there’s around 700.”

During the 70s and 80s Denis scooped numerous New Zealand wine awards with his Gewürztraminer and Chardonnay, and had the nerve and enterprise to enter international wine competitions. That audaciousness helped introduce New Zealand wine to the United Kingdom and Australia at a time when no one else was.

“We were really radical for back then. There was almost a superstar element to it as we were entertaining prime ministers and international wine critics. But behind-the-scenes the life we were living was actually a continuation of my father’s hard working days”.

Denis sold Matawhero Wines to Richard and Kirsten Searle in 2008 and says he’s been delighted with what has happened since the baton was passed on.

You must be over 18 years old to visit this site and enjoy our distinctive wines. (Sorry)

You are not old enough to view this content
No, Not yet Yes, I am

10% off your first purchase

Thank you for visiting Matawhero!